StubHub’s 2022 Summer Tour Preview: With Nearly Twice the Events of 2019, This May Be the Hottest Summer Concert Season on Record; Mötley Crüe’s Comeback with Def Leppard is the Most In-Demand Tour

With the temperatures warming and Memorial Day just around the corner, StubHub is pleased to share the return of our annual Summer Tour Preview showcasing the season’s highest-selling artists and in-demand shows. Music fans are eager to make live concerts part of their regular summer routine again: with nearly double the number of events, this summer’s concert itinerary is already driving 25% more ticket sales on StubHub than the 2019 season. Here’s a look at the tours driving that demand:

Mötley Crüe and Def Leppard is the #1 highest-selling tour of the summer.

Justin Bieber is seeing more demand than any other pop star, even as the U.S. leg of his first tour since 2017 winds down.

Kenny Chesney is the highest-selling country act, commanding nearly 40% more sales than his previous tour in the summer of 2018.

“This may be the busiest concert season on record, with more than double the events on StubHub than we saw in 2019,” said Adam Budelli, spokesperson for StubHub. “This packed lineup of tours is already driving 25% more demand than the 2019 season, driven by the prominence of once-in-a-lifetime concerts. From Rage Against The Machine’s reunion to Elton John’s farewell, we’re seeing the impact of concert-goers who are excited that bucket-list bands are hitting the road again and eager to witness what may be a legacy act’s final tour.” 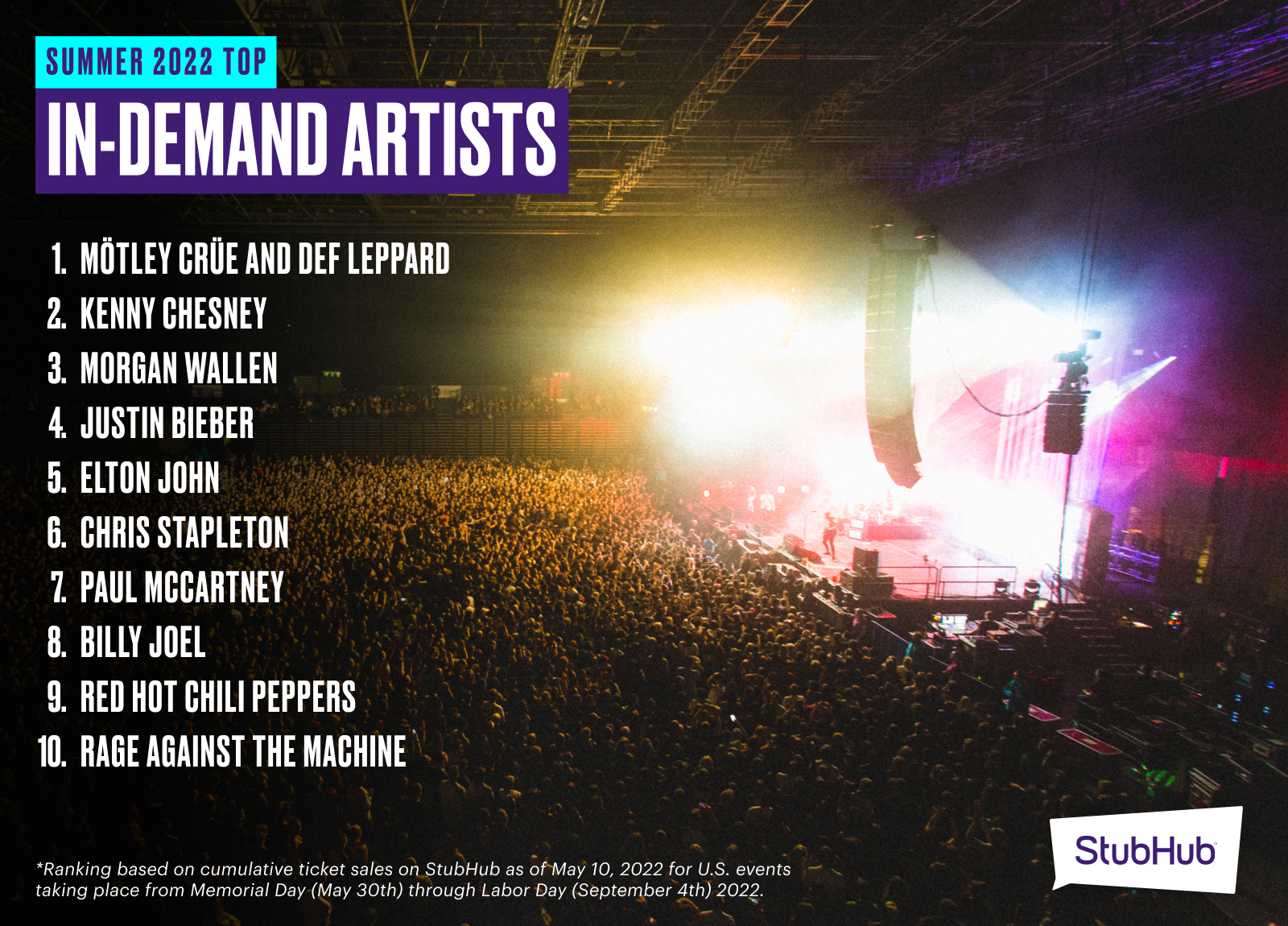 *Ranking based on cumulative ticket sales on StubHub as of May 10, 2022 for U.S. events taking place from Memorial Day (May 30th) through Labor Day (September 4th) 2022.

*Ranking based on average ticket sales per show on StubHub as of May 10, 2022 for U.S. events taking place from Memorial Day (May 30th) through Labor Day (September 4th) 2022.

Speaking to this year’s “summer of rock” theme, reunited groups like the Wallflowers and rising female stars like Mitski see big jumps in demand.

“Alternative singer-songwriter Mitski and pop star Charli XCX, fresh off a Saturday Night Live performance, prove they are ones to watch, with both seeing more than quadruple the average sales per concert on StubHub this summer in comparison to 2019,” said Budelli.

*Rankings based on cumulative ticket sales on StubHub as of May 10, 2022 for U.S. events taking place between Memorial Day (May 30th) through Labor Day (September 4th). 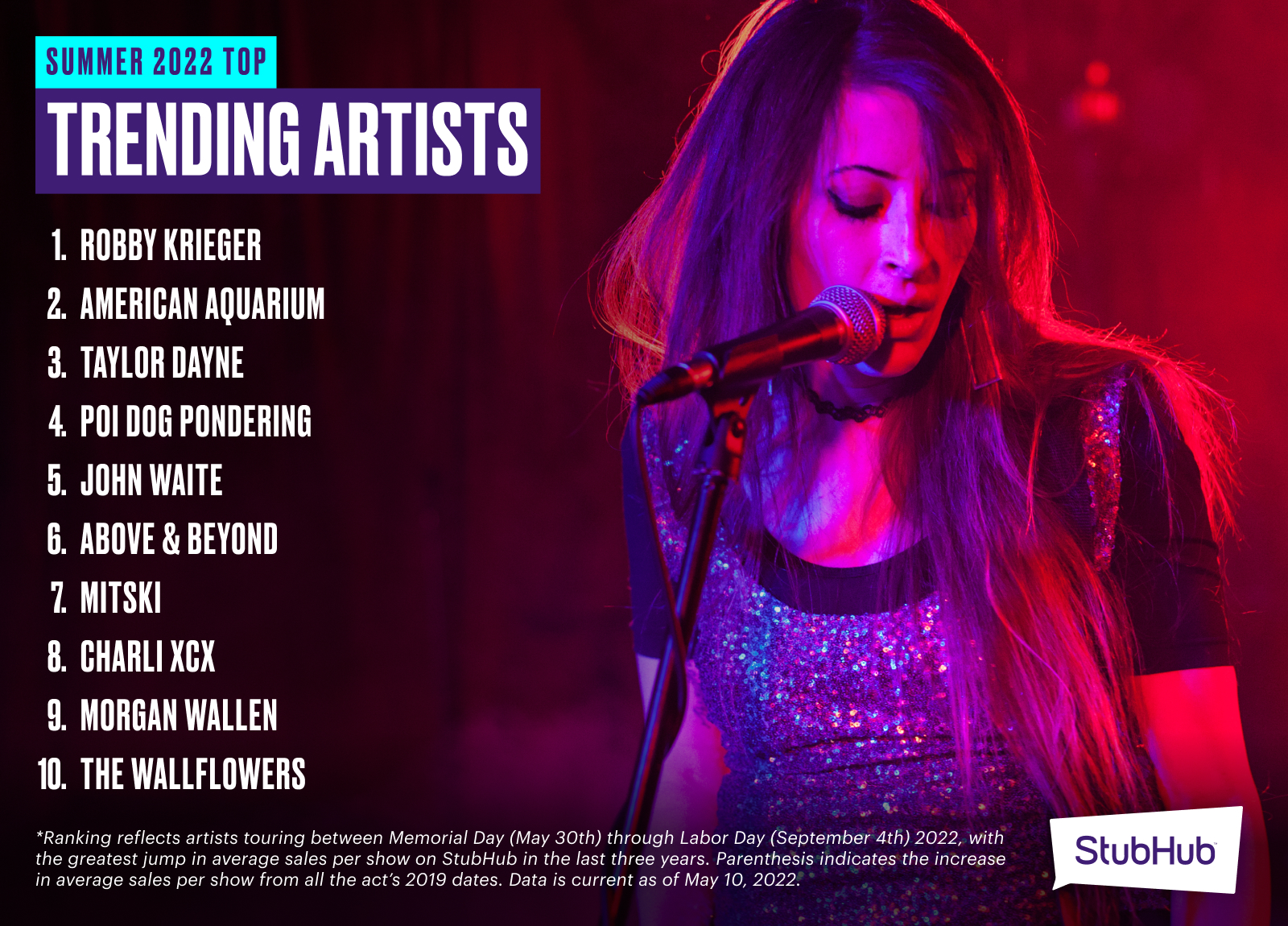 MOST IN-DEMAND SUMMER CONCERTS BY CITY

As these acts make their way across the country, we dig into our top music markets to showcase the top events in each market this summer. Among the top concerts in each city, Lady Gaga’s Chicago stop on August 15 claims the highest average price of tickets sold ($349), while Brandi Carlile’s Nashville date on July 8 is the most affordable ($124).

*Rankings based on cumulative ticket sales on StubHub as of May 10, 2022 for U.S. events taking place between Memorial Day (May 30th) through Labor Day (September 4th) 2022 in each metro area.

At StubHub, our mission is to bring the joy of live to fans globally. As the world’s most trusted ticket marketplace, we enable fans to buy and sell tickets to tens of thousands of events, whenever and wherever fans want to be. Backed by award-winning customer care, StubHub’s FanProtect™ Guarantee means every ticket is guaranteed valid or you’ll receive a replacement ticket of equal or better value, or your money back. Our business partners include more than 130 properties across the NFL, MLB, NBA, NHL, MLS, NCAA and Paciolan. StubHub provides the total end-to-end event going experience throughout the world. For more information on StubHub, visit StubHub.com or follow @StubHub on Twitter, Facebook, Instagram or LinkedIn.