StubHub, the world’s most trusted ticket marketplace and Official Partner of Major League Baseball (MLB), has announced the return of its annual MLB Preview, highlighting the most in-demand teams and anticipated matchups of the year. 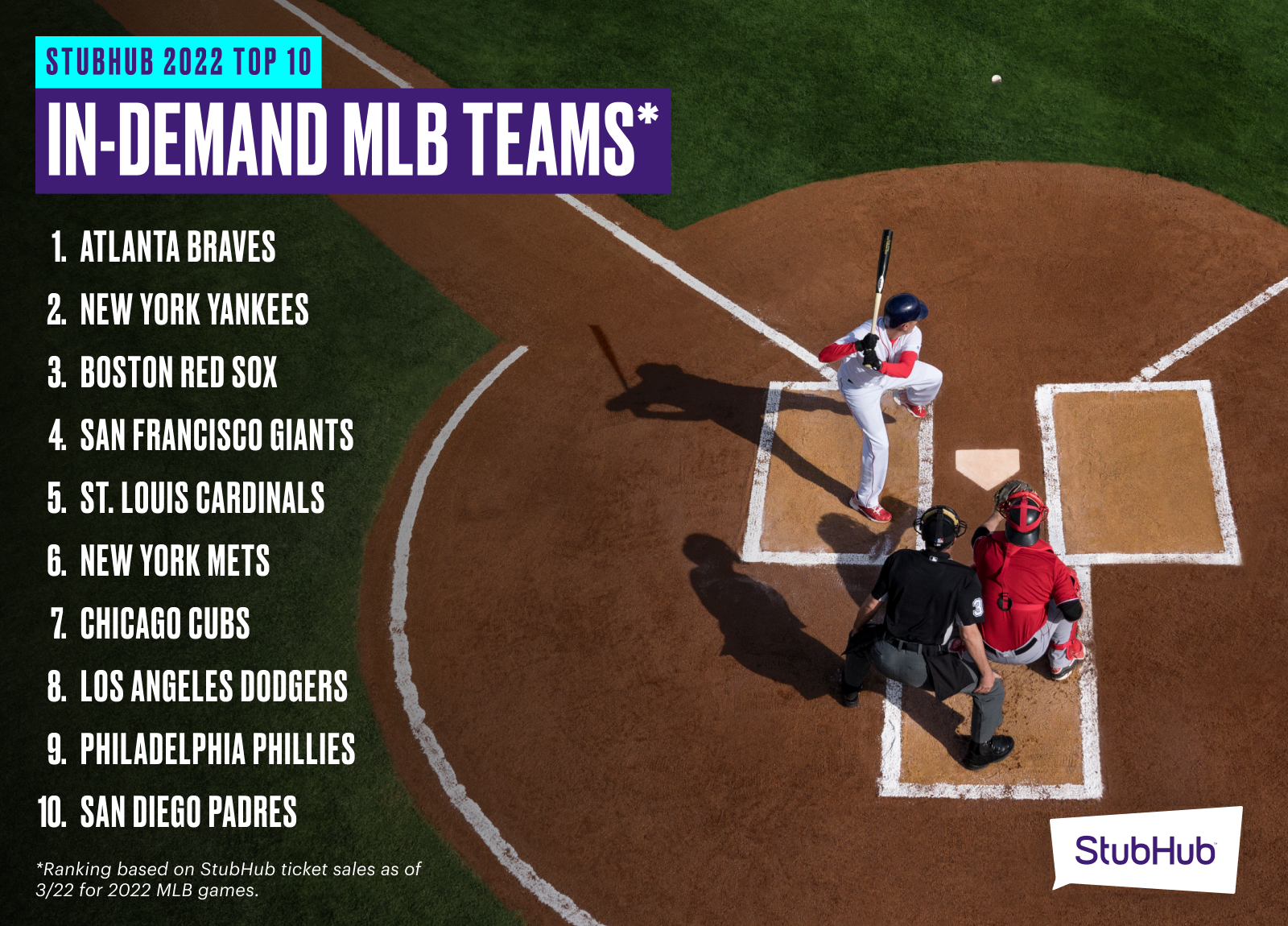 Heading into a new MLB season, the Atlanta Braves are StubHub’s most in-demand team for the first time following their 2021 World Series win. The Braves are seeing nearly 10% more ticket sales than StubHub’s previously highest-ranking team the New York Yankees, who claimed the #1 spot on the list from 2018-2020 and now land at #2. The Boston Red Sox round out the top three teams, heading into a new season with a stacked roster including shortstop free agent Trevor Story.

Taking a look at how this year’s list compares to StubHub’s ranking of the top MLB teams before the start of the 2020 season, the San Francisco Giants jumped five spots to land at #4 ahead of their rivals, the Los Angeles Dodgers, who rank at #8. The St. Louis Cardinals rose one spot from their ranking in 2020 to #5, as fans hope for the team’s fourth consecutive appearance in the playoffs. For the first time, the San Diego Padres have entered StubHub’s list at #10 with an up-and-coming roster of players, while the West Coast is making a strong showing overall with three California teams in the top 10.

“Fans are eager for the return of baseball season, especially those in Atlanta celebrating the Braves’ first World Series win since 1995. Entering StubHub’s ranking of the top-selling MLB teams for the first time, the Braves are the most in-demand franchise going into the season and have dethroned the Yankees, who have traditionally held the #1 spot,” said Adam Budelli, spokesperson at StubHub. 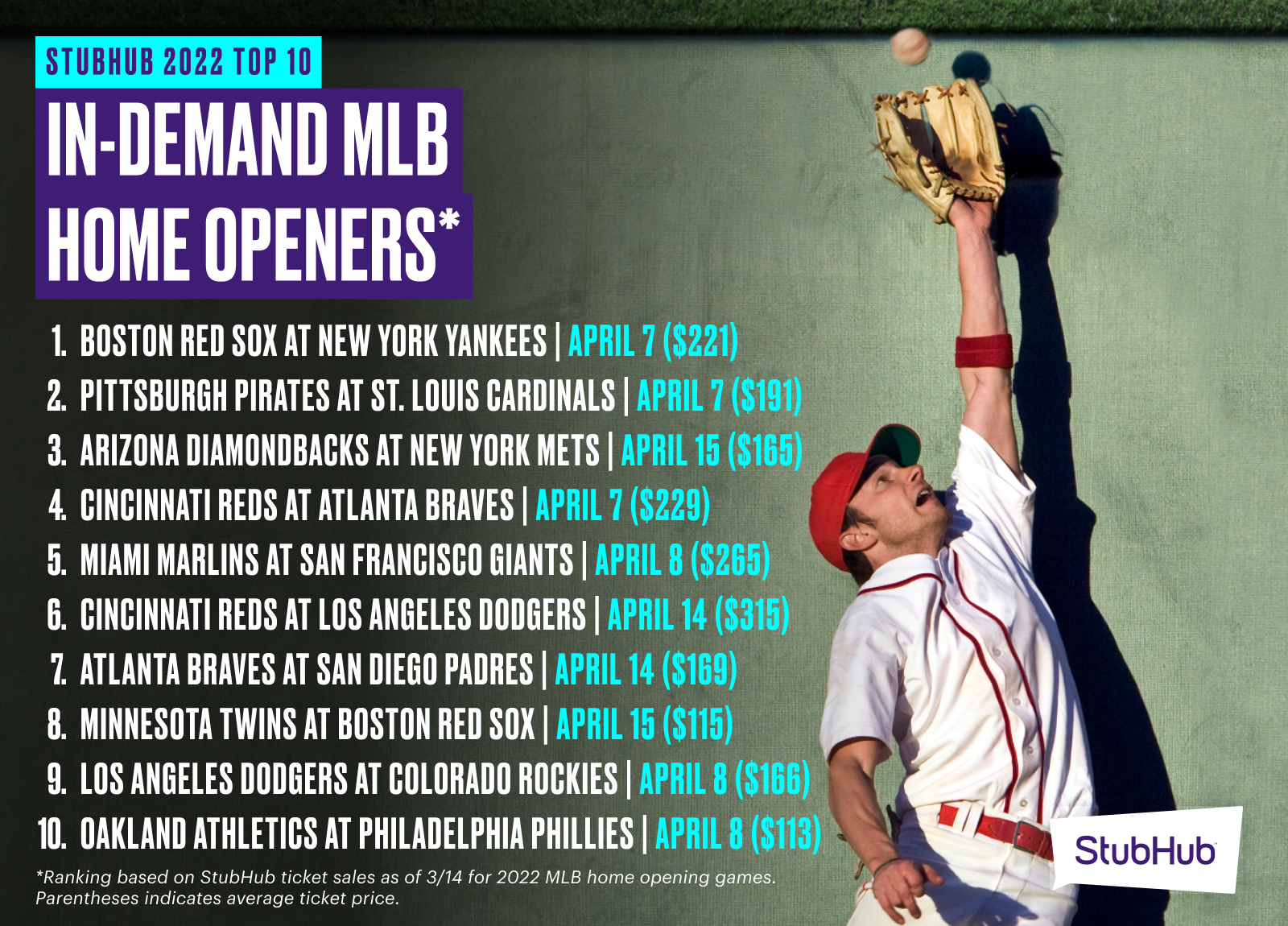 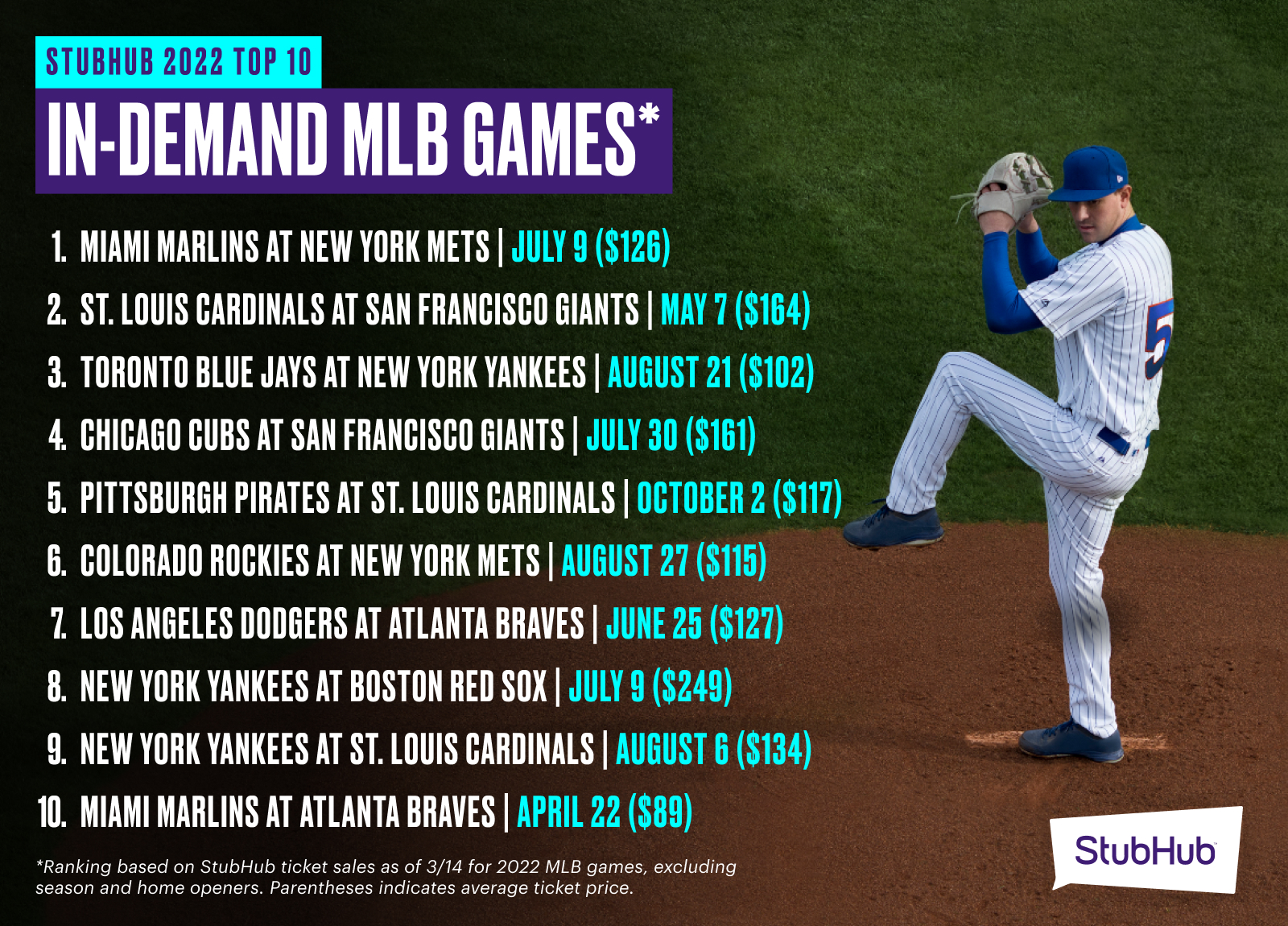 “The Red Sox-Yankees matchup on April 7 is the best-selling Opening Day game on StubHub. Looking ahead to the rest of the season, the Marlins face the Mets on July 9 in our #1 most in-demand MLB game of the year, excluding season openers,” said Budelli. “The Mets, Giants and Braves dominate StubHub’s ranking of the highest-selling games, with each team playing in two of our top 10 games.” 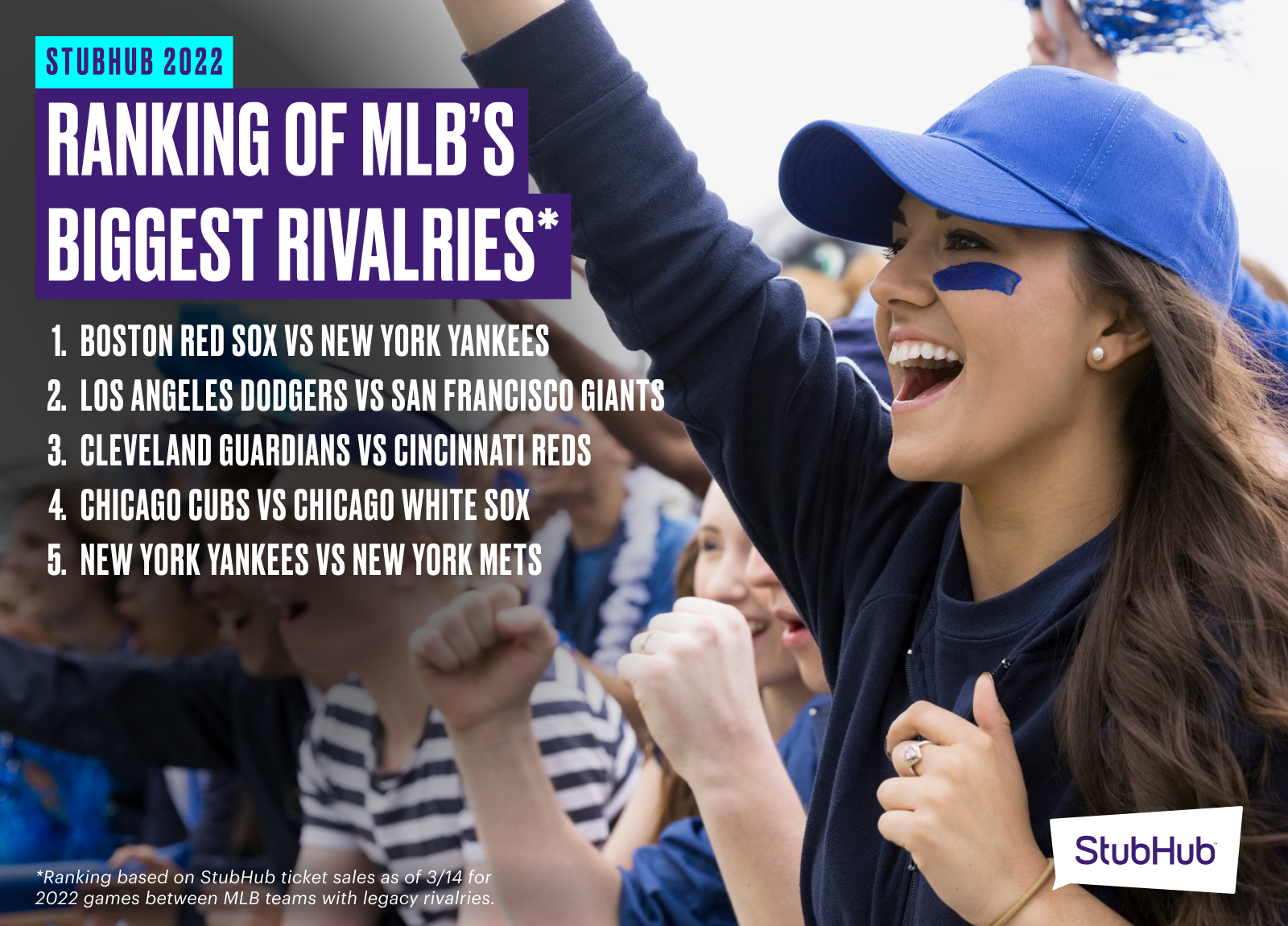 April 7th’s matchup between the Red Sox and Yankees is the season’s most in-demand Opening Day game. These iconic teams are also the year’s hottest-selling rivals in baseball, based on StubHub’s comparison of ticket sales for matchups between MLB franchises that have legacies of rivalries. Games between the Red Sox and Yankees are seeing nearly 400% more ticket sales than those between StubHub’s second best-selling rivals, the LA Dodgers and SF Giants. The Cleveland Guardians and Cincinnati Reds rank as the third most in-demand rivals of the season.

“A big trend we’re seeing this season is the rebirth of classic baseball rivalries after many legacy rival teams faced each other in last year’s playoffs. The Yankees and Red Sox are our hottest-selling rivals, with matchups between the storied teams making up nearly a tenth of our MLB ticket sales this season,” said Budelli. “The Dodgers and Giants are also heating up as our #2 highest-selling rivalry. Across both coasts, ticket buyers from California and New York account for nearly a third of all baseball sales in the U.S. on StubHub.”

The Braves’ home opening weekend against the Cincinnati Reds rank as the team’s most in-demand games of the overall season.

The Dodgers’ home opening weekend against the Cincinnati Reds rank as the team’s most in-demand games heading into the season.

At StubHub, our mission is to bring the joy of live to fans globally. As the world’s most trusted ticket marketplace, we enable fans to buy and sell tickets to tens of thousands of events, whenever and wherever fans want to be. Backed by award-winning customer care, StubHub’s FanProtect™ Guarantee means every ticket is guaranteed valid or you’ll receive a replacement ticket of equal or better value, or your money back. Our business partners include more than 130 properties across the NFL, MLB, NBA, NHL, MLS, NCAA and Paciolan. StubHub provides the total end-to-end event going experience throughout the world. For more information on StubHub, visit StubHub.com or follow @StubHub on Twitter, Facebook, Instagram or LinkedIn.